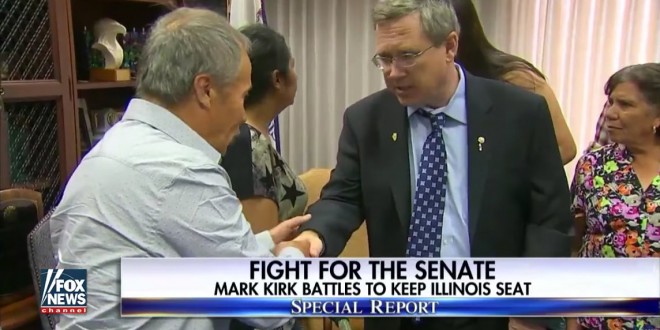 Republican U.S. Sen. Mark Kirk, who has made opposition to a U.S.-led nuclear agreement with Iran a major theme of his re-election campaign, likened home-state President Barack Obama to “drug dealer in chief” over a $400 million payment linked to the release of American prisoners.

Kirk’s controversial rhetoric has been an issue as the first-term senator is viewed as perhaps the most vulnerable Republican incumbent nationally this fall. He is being challenged by two-term Democratic U.S. Rep. Tammy Duckworth of Hoffman Estates.

The latest eyebrow-raising comment came as he spoke last week to a Downstate newspaper. Kirk echoed GOP criticism that the U.S. cash payment of $400 million to Iran was a ransom for the release of American prisoners held by the country.

The DNC slammed Kirk’s comment today in a press release:

“In calling our first African American president a drug dealer, Mark Kirk has demonstrated that Donald Trump’s hateful rhetoric and divisive politics have taken over the entire Republican Party. Kirk has spent millions of dollars trying to distance himself from Trump but it’s clear that the Republican Party has become the party of Trump. Mark Kirk owes the First Family, the people of Illinois, and the American public an apology for his ugly and racially tinged remarks.”

RELATED: Back in March the Human Rights Campaign was strongly criticized by some on the left after endorsing Kirk over Democrat Tammy Duckworth.