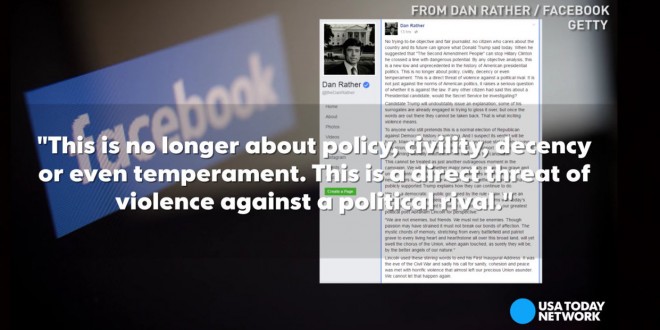 Dan Rather, formerly of CBS Evening News, took to Facebook in a scathing rant after Donald Trump implied that people with guns could stop Hillary Clinton as president from appointing anti-gun judges.

“When he suggested that ‘The Second Amendment People’ can stop Hillary Clinton he crossed a line with dangerous potential,” Rather wrote in his post Tuesday night. “By any objective analysis, this is a new low and unprecedented in the history of American presidential politics. This is no longer about policy, civility, decency or even temperament. This is a direct threat of violence against a political rival. It is not just against the norms of American politics, it raises a serious question of whether it is against the law. If any other citizen had said this about a Presidential candidate, would the Secret Service be investigating?”

Rather explained that he felt no explanation could justify Trump’s comment. It was a sort of “Murrow moment,” parallel to when CBS broadcaster Edward R. Murrow called out Sen. Joe McCarthy for targeting innocent civilians under the guise that they were Communists supporting Soviet Russia.

Rather continued in his post: “Candidate Trump will undoubtedly issue an explanation; some of his surrogates are already engaged in trying to gloss it over, but once the words are out there they cannot be taken back. That is what inciting violence means. To anyone who still pretends this is a normal election of Republican against Democrat, history is watching. And I suspect its verdict will be harsh.”