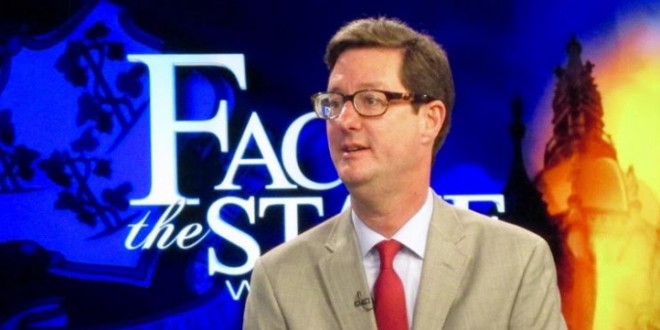 Back in June when House Democrats staged their gun control sit-in, homocon House candidate Clay Cope told the press that he was going to buy a gun because he feels “targeted” as a Christian gay man. Today he brags to NBC News about his support for Donald Trump:

To explain the appeal of Trump’s politics, he described his first experience at a Trump rally in Fairfield, Connecticut. “It was packed to the gills,” he recalled. Despite summer heat, a crowd of more than 4,000 (according to Cope) were “willing to wait in line for a very long time to see this man. It was something to behold.”

The issue drawing so much support is the economy, according to Cope. “They want a better, stronger economy,” he said of the rally-goers. “He is preaching to the right crowd.” In anticipation of the criticism of Trump rallies that they are racist, homophobic and often violent events, Cope said: “What I saw was people helping people.”

Cope resolves what appears to be a contradiction in the GOP’s approach to issues of sexuality and gender by focusing on “anti-discrimination” rather than questions of identity. This flows from his own “very welcoming “experience of being gay in the GOP. “I never had anyone question me about my sexuality, about my relationship with my partner,” he said.

When asked about the apparent unwelcoming content of the 2016 GOP platform, he said: “I don’t think the party is the platform. Voters vote for candidates not a party platform. I don’t agree with every aspect of the platform, but I am focused on issues.”

When it comes to the role of identity in public office, “I never think about it. Did I have gay cereal this morning? No. The decisions I make are always what I think is the best for my constituents. I am liking what I’m hearing from Pence. He does not believe in discrimination. And neither do I.”

Pence doesn’t believe in discrimination so much that he happily signed a law making it legal for Indiana businesses to refuse to serve gay customers. But whatevs! Go Trump! Cope is challenging Rep. Elizabeth Esty, who narrowly won her House seat in 2012 and 2014.

Previous Coulter Threatens To Turn On Trump: If He Flip-Flops On Immigration I’ll Cancel My Book Tour [VIDEO]
Next The Liberal Redneck: Pushups For The Troops [VIDEO]