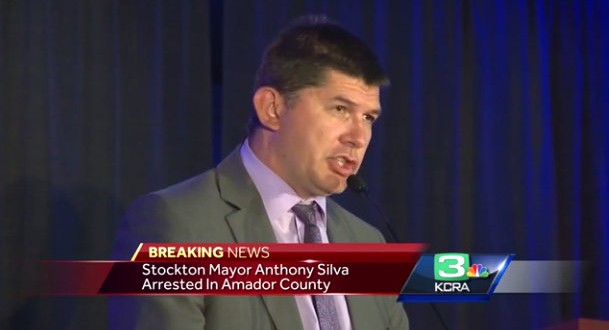 GOP Stockton Mayor Anthony Silva, who has held official town hall meetings at an anti-gay megachurch and who ceremoniously gave the key to the city to God (who did not attend), has been arrested on multiple charges including secretly recording a male teenager playing a game of strip poker in his bedroom at a summer camp. Sacramento’s NBC affiliate reports:

Silva, 41, was charged with eavesdropping or recording confidential communications, contributing to the delinquency of a minor, providing alcohol to a minor and cruelty to a child by endangering health, according to court records. The incidents for which Silva is being charged happened between Aug. 5 and Aug. 9, 2015, at the Stockton Silver Lake Camp, according to the Amador County District Attorney.

The arrest stems from a September 2015 FBI investigation where Silva’s cell phone was seized by Homeland Security investigators at San Francisco International Airport as he got off a flight from China. One of the clips on Silva’s phone contained audio of several people during a strip poker game in Silva’s bedroom at the camp, the Amador County district attorney said. One of the participants was 16 years old.

The district attorney said the audio revealed that participants in the poker game did not want to be recorded. Witnesses stated that Silva supplied alcohol to a number of underage counselors at the camp as well, according to the Amador County district attorney.

Silva was arrested today at the camp where the 2015 incidents allegedly occurred. But wait there’s more: Silva has been under investigation for alleged sexual misconduct multiple times, even before he was sworn in as mayor in 2013. When he was a high school water polo coach in 2004, Silva was accused of secretly taping teens in the bathroom of his apartment. Charges were never filed.

Authorities also investigated Silva in 2011 for an alleged rape attempt on a 19-year-old woman when he was president of the Boys and Girls club. In this case, prosecutors did not press charges due to lack of evidence.

The mayor was also investigated by the San Joaquin County District Attorney’s office in 2013 after admitting he secretly recorded a conversation with the city manager without his permission.

Oh, but we’re not done yet. From earlier this week:

Friday we learned that a gun used in a drive-by shooting that killed a 13-year-old boy in Stockton was registered to the city’s mayor, Anthony Silva.

And there’s this from last year:

LGBT leaders say they will ask the City Council tonight to reject Mayor Anthony Silva’s appointment of activist Motecuzoma Sanchez to a citizen’s commission developing proposed amendments to Stockton’s charter. The LGBT leaders say they object to past posts by Sanchez on social media that they say are homophobic and racist.

Members of the San Joaquin Pride Center have taken greatest offense to past Facebook posts in which Sanchez refers to some members of Stockton’s LGBT community as “the gay pride mafia.” They also object to multiple Facebook references to Stockton Assemblywoman Susan Eggman, who is gay, as “Egg man.”

Another Sanchez post on Facebook late last year was of a picture of a grinning “Black Jesus” holding two 40-ounce bottles of alcohol. At the bottom of the picture, Sanchez typed “#reinventstockton.” The hashtag mocked the slogan of Councilman Michael Tubbs, who is black, and the post appeared shortly after Tubbs’ DUI arrest.