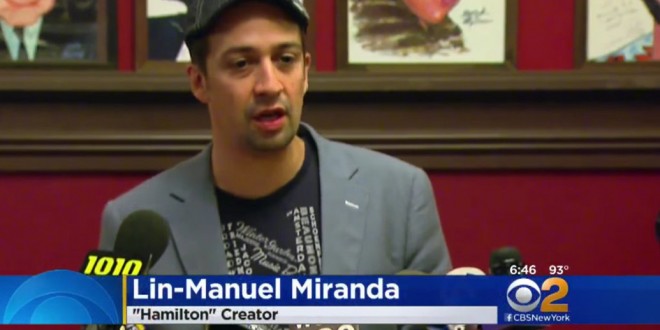 Hamilton creator Lin-Manuel Miranda and New York Sen. Chuck Schumer held a press conference Sunday urging Congress to pass legislation that would crack down on ticket scalpers. If the bill – dubbed the Better On-line Ticket Sales Act of 2016, or the BOTS Act – is approved by federal lawmakers, scalpers that employ automated “bots” to scoop up hundreds of tickets to sell on the secondary market could face massive fines. “The bot software that’s used right now basically makes the price range – even a special event price range – out of the range for most Americans,” Miranda said.

“If the starting price for a ticket to Hamilton is $189, but the bots have been selling them from anywhere from $600 to $2,000 a ticket – just think how much money the people make,” Schumer said. According to Schumer’s office, scalpers used bots to grab over 20,000 Hamilton tickets during Miranda’s run in the title role; from that surplus of tickets, scalpers walked off with over $15.5 million by selling their bot-bought tickets to roughly 100 Hamilton performances. At one point, scalpers were profiting $250,000 a week off of Hamilton, ripping off both the musical and its fans.