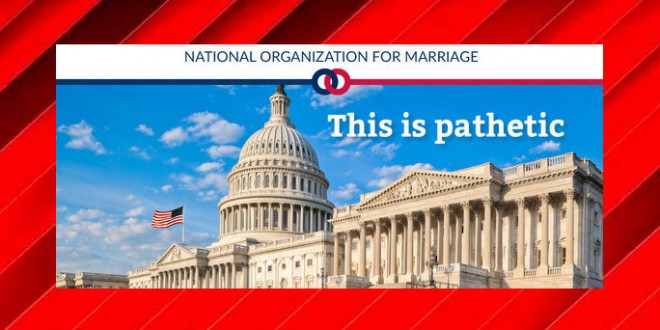 Brian Brown To Supporters: You People Are Pathetic

Any professional fundraiser will tell you that the best way guarantee donations is to tell your supporters how much they suck for not sending enough. From Brian Brown:

NOM began our critical Summer Membership Drive on July 22nd. We’re now three weeks into our drive — the halfway point — and we have only received 256 contributions from our members. We’re only 17% toward our goal of receiving 1,500 membership contributions of at least $35. That is pathetic.

Unless this situation improves drastically right away, NOM will have little choice but to cut some of the critical programs we have underway and not pursue some of our most important work to protect you and other supporters of marriage from being targeted by LGBT extremists and their allies in government.

We can’t fight President Obama’s dangerous gender ‘identity’ agenda with only a 17% participation rate. And we can’t effectively educate the American people about the issues, or establish a grassroots network, or work with allies in the states if only 17% of our supporters are willing to step up.

I really don’t believe — I just can’t imagine the thought — that NOM’s members have quit fighting for the institution of marriage as a union between man and woman. And yet, only 256 of you have responded with an urgently needed membership contribution during this critical period.

I’m going to be blunt: we need 1,500 people to step up with a membership contribution of at least $35 in order to raise the $52,500 we’re short so far this year. Without that type of response, we’ll have no choice but to lay people off, cut programs and stop pursuing some of our most important work.

NOM is the only organization in America that is solely dedicated to fighting for marriage and the faith communities that sustain it. That means if NOM has to scale back, the fight for marriage and religious liberty is seriously weakened.

It means that we may not be able to organize and mobilize the millions of marriage supporters in America to lobby the next President and the US Senate to only appoint and confirm Supreme Court justices who will reverse the illegitimate and anti-constitutional ruling redefining marriage.

So much is at stake, and yet only 256 of you have stepped forward thus far to help ensure we are able to continue our critical work. The fight for marriage and religious liberty sits on a knife-edge, teetering between preservation and devastating loss.

As I noted last week, NOM remains one of last remaining hate groups to support the so-called First Amendment Defense Act (FADA). The Family Research Council, the Liberty Counsel, and the American Family Association all pulled their support after the bill was amended to also legalize discrimination against straight married couples. As a supposedly one-issue organization, NOM, perhaps obviously, is far more desperate for money than the others. Especially now that their one issue is legally moot.