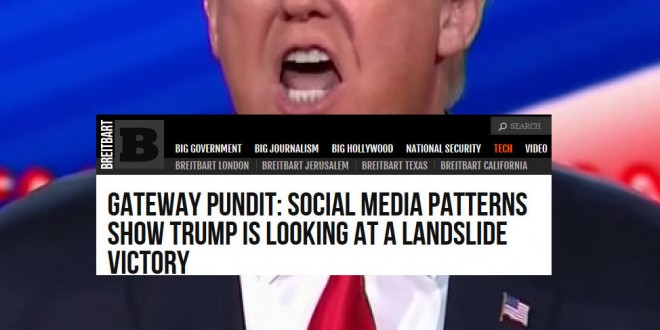 Breitbart: Trump Will Win In A Landslide

The lead article on Breitbart this morning quotes the homocon site Gateway Pundit, which has declared that Donald Trump will win in a landslide. Gateway Pundit author Jim Hoft, widely known as “the stupidest man on the internet” discounts polls and historical electoral trends in favor of the number of social media followers and viewers of campaign rally live-streams. According to Hoft, Trump will win because he has twice as many Facebook followers as does Hillary Clinton and because he has more fans on Reddit. Case closed! Hoft similarly predicted a landslide for Mitt Romney in the final days of the 2012 campaign.

RELATED: On Friday a writer for Gateway Pundit was charged with ten felony counts of menacing Black Lives Matter protesters with a firearm. He faces up to 40 years in prison.

Previous Marco Rubio: No Abortions For Zika-Infected Women
Next POLL: Hillary +12 In Battleground State Of Virginia