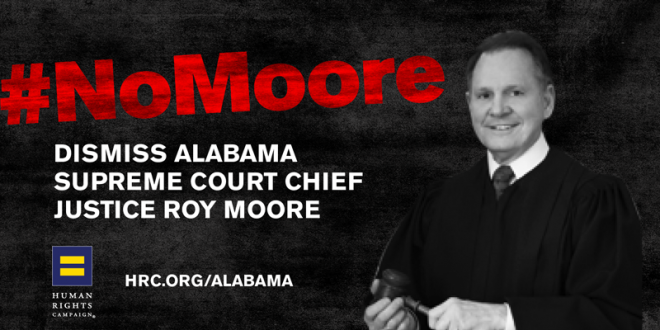 The billboard, which reads “#NoMoore: Dismiss Alabama Supreme Court Chief Justice Roy Moore” goes up as Moore, suspended from the bench in May, is set to be questioned by judicial prosecutors during a hearing Monday on ethics charges. He faces the possibility of removal from the state’s high court.

The #NoMoore billboard is located off I-85, near Hutchinson Street in downtown Montgomery — a few blocks from Monday’s hearing location.

“Roy Moore took an oath to uphold the laws of the United States and Alabama, yet he has flagrantly defied every federally binding pro-marriage equality ruling,” said Eva Kendrick, state manager of the Human Rights Campaign, Alabama.

“This billboard serves as a reminder that Roy Moore is unfit to serve the people of Alabama on our highest court, and should be removed and censured for his obstructionist tactics.”