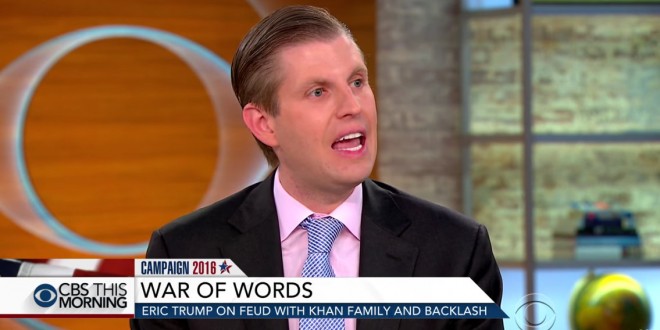 Eric Trump: My Strong Powerful Sister Would Never Let Herself Be Sexually Harassed At Work [VIDEO]

If Ivanka Trump was being sexually harassed at work, she should take it to human resources, her brother Eric Trump said Tuesday — adding that it likely wouldn’t get to that point because she’s “a strong powerful woman” who wouldn’t “allow herself to be subjected to that.” The vice president of the Trump Organization was speaking to CBS This Morning when he was asked about a comment his father had made to USA TODAY in a Monday column.

In an interview with USA TODAY columnist Kirsten Powers, Donald Trump was defending former Fox chief Roger Ailes, who has stepped down in the wake of sexual harassment allegations. When Powers asked Trump what he would advise his daughter Ivanka to do if she were being harassed, Trump replied: “I would like to think she would find another career or find another company if that was the case.”

Eric Trump on handling workplace sexual harassment: “Ivanka is a strong, powerful woman. She wouldn’t allow herself to be subjected to it”

Previous Obama: Trump Is Unfit To Be President [VIDEO]
Next VIRAL VIDEO: This Is An Ad For Something