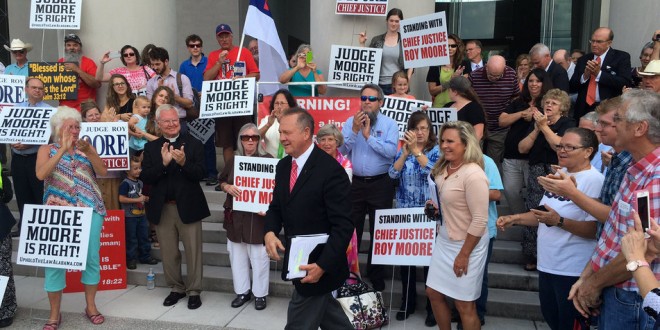 ALABAMA: Haters Rally For Justice Roy Moore As Court Says It Will Soon Decide On Booting Him From Bench

Alabama’s Court of the Judiciary said it will soon decide whether to remove Alabama’s suspended chief justice, Roy Moore, from office after hearing Monday from both sides on his misconduct charges.

Moore is accused of violating judicial ethics by urging probate judges to defy the federal courts and keep denying marriage licenses to gays and lesbians, months after the U.S. Supreme Court ruled that everyone has a fundamental right to marry.

His attorney, Mat Staver, argued Monday that Moore never told anyone to disobey the U.S. Supreme Court ruling on same-sex marriage, and did nothing to warrant a misconduct conviction.

The rally came in advance of today’s hearing by the Alabama Court of the Judiciary on ethics charges against Moore. A smaller group of Moore opponents also appeared on the steps of the judicial building.

Lynn Thompson, a stay-at-home mother from Trinity, near Decatur, came to Montgomery today to support Moore. “Courts do not make the law, they issue opinions,” Thompson said. “The law of Alabama is that marriage is between one man and one woman. Judge Moore is the last leader in our country that is actually taking a stand for what is right.”

“The Judicial Inquiry Commission abused its authority when it filed charges against Chief Justice Roy Moore,” said Mat Staver, Founder and Chairman of Liberty Counsel, who represents Moore. “The charges should never have been filed and must be dismissed. The JIC knows that it has no case and refuses to face the reality of the four-page administrative order, which any plain reading reveals did not direct the probate judges to disobey the U.S. Supreme Court. The JIC’s charges are full of colorful adjectives and lacking in substance,” said Staver.

Chief Justice Roy Moore has come out to talk to the press pic.twitter.com/r19Q3a2rdl

Roy Moore with his wife and attorney are now outside addressing supporters & media. #alpolitics #liveon3340 pic.twitter.com/YRTRbJdb5K

Seems to indicate the trial will be held in September.But not official yet.