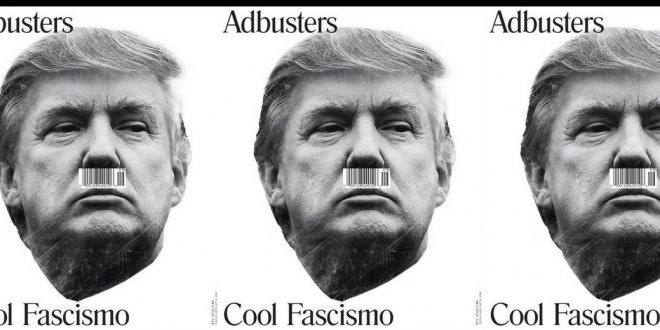 The latest issue of Adbusters hits newsstands in the U.S. on Tuesday and its coverboy is a man who needs no introduction. The six-times-a-year title, which is published by the Adbusters Media Foundation, a 27-year-old Vancouver-based nonprofit group that was behind the Occupy Wall Street protests, presents The Orange One in stark black and white and makes creative use of the magazine’s actual Universal Product Code.

Adbusters Issue #127 takes on the rise of global fascism, exposing the symptoms of a sick and outdated system. Everywhere you look, fascist tendencies are creeping into view as each day our world falls further and further into chaos. Have we forgotten the lessons of the past? Will we bury our heads into the comforts of virtual reality while egomaniacs capture the imagination of the masses? Cool Fascismo is an unprecedented exploration into a world where a culture of cool becomes a culture of fear.