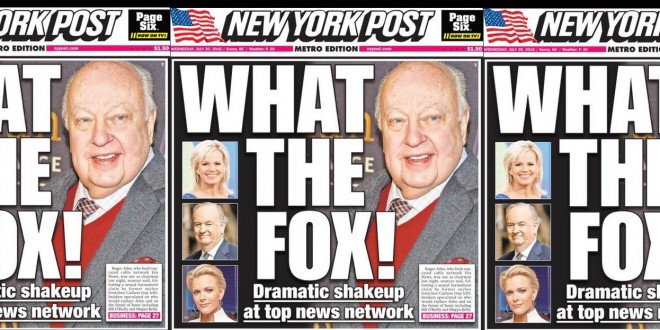 New York Post On Roger Ailes Scandal: What The Fox!

From what I can tell this is their first story about the Ailes scandal. They write:

Roger Ailes’ 20-year reign as the boss of cable TV’s No. 1 news outlet could soon be coming to an end as he negotiates his departure from Fox News Channel. Ailes, 76 — who built Fox News into an influential, $3 billion business — is reportedly being shunted aside in the wake of a sexual harassment suit filed against him by former anchor Gretchen Carlson.

Ailes has strongly denied the accusation. And while most FNC female staffers lined up to support Ailes, one did not: Megyn Kelly. Kelly, a prime-time anchor, has remained publicly silent on the matter. On Tuesday, however, New York magazine reported that she told Fox lawyers conducting an internal probe that Ailes had sexually harassed her, too, in the mid-2000s, when she was a Washington correspondent. It was not clear what kind of harassment she alleged.

A departure by Ailes could bring chaos to the Fox News Channel. Several of the network’s biggest stars — Bill O’Reilly, Sean Hannity and Greta Van Susteren — have clauses in their contracts that would allow them to leave if Ailes exits, according to a report in the Financial Times.

The New York Post and Fox News Channel were both owned by News Corporation until 2013, when the media behemoth split into two separate companies, one primarily for print publishing and the other for radio, television and films. Roger Murdoch remains the chairman of both.