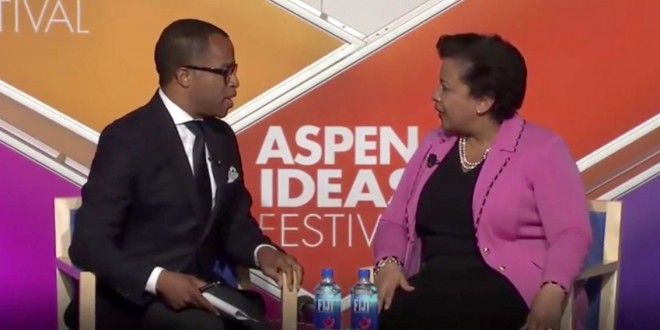 WaPo Reporter Grills Lynch On Private Meeting With Bill Clinton: What On Earth Were You Thinking? [VIDEO]

The Washington Post‘s Jonathan Capehart spoke for many in Washington Friday when he quizzed Attorney General Loretta Lynch in an Aspen town hall, asking bluntly why on earth she thought it was a good idea to meet privately with Bill Clinton.

Capehart, a liberal, praised Lynch for “having the highest integrity, utmost solid judgment. So when people heard what went down in Phoenix, a lot of people– I mean friends, supporters, backers are saying, what on earth was she thinking talking to Bill Clinton?”

“So… what on earth were you thinking?” he asked to laughter. “What happened?”

Lynch took the question in stride, chuckling and calling it “perfectly reasonable… I completely get that question, and I think it is the question of the day. But I think the issue is, again, what is my role in how that matter is going to be resolved.”

Attorney General Loretta E. Lynch said Friday she will “accept” the recommendations from prosecutors and others leading probes into the use of a private email server by Hillary Clinton during her time as secretary of state.

Lynch’s statement during a gathering in Colorado underscored the intense sensitivity surrounding the FBI and Justice investigations into the past use of an exclusive email server by the presumptive Democratic presidential nominee.

By promising to abide by the recommendations, Lynch directly addressed worries by Clinton critics and others that she — as an Obama administration appointee — could ultimately overrule the investigators.

Her statement reflects an apparent desire to reinforce a by-the-book approach to the Clinton case, which has already played a dominant role in Republican attacks on the campaign trail.

“I certainly wouldn’t do it again. Because I think it has cast a shadow,” Lynch said of her meeting with Bill Clinton. “The most important thing for me as attorney general is the integrity of this Department of Justice. And the fact that the meeting I had is now casting a shadow over how people will view that work is something that I take seriously and deeply and painfully.”

The attorney general told reporters this week that the meeting was “primarily social” in nature and that the investigation into Hillary Clinton did not come up, but the fact that the two spoke privately at all was enough to reignite concerns that the probe into the presumptive Democratic nominee’s email might be subject to political influence.

Lynch told Capehart that she had already decided on her role in the investigation months ago, long before her meeting with Bill Clinton. As far as when investigators might present their conclusions, Lynch said she did not know.

Previous Hillary Pens Farewell Note To The Toast
Next Pope Benedict: I Broke Up The Vatican’s Gay Lobby