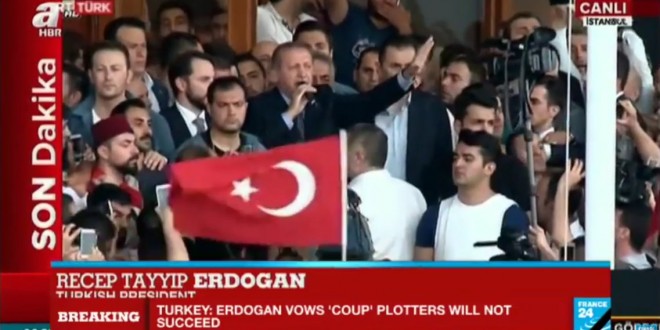 Forces loyal to Turkey’s president quashed a coup attempt in a night of explosions, air battles and gunfire that left dozens dead Saturday. Authorities arrested thousands of people as President Recep Tayyip Erdogan vowed those responsible “will pay a heavy price for their treason.”

The chaos capped a period of political turmoil in Turkey — a NATO member and key Western ally in the fight against the Islamic State group — that critics blame on Erdogan’s increasingly authoritarian rule. He has shaken up the government, cracked down on dissidents, restricted the news media and renewed conflict with Kurdish rebels.

Pressure has also come from millions of refugees who have fled violence in neighboring Syria and Iraq, and a series of bloody attacks blamed on the Islamic State group and Kurdish rebels.

Erdogan was on a seaside vacation when tanks rolled into the streets of Ankara and Istanbul. He flew home early Saturday and declared the coup to have failed.

A violent, chaotic night in Turkey ended with at least 161 people dead following an attempted coup; and President Recep Tayyip Erdogan’s reappearance after hours of uncertainty. Prime Minister Binali Yildirim said at a press conference Saturday the situation was under control, with all commanders back to work.

“Our nation in this incident has shown a great resilience,” Yildirim said. “Those who have done this uprising should understand this reality that no one can play games with the stability of this country and the love of freedom and democracy.”

An additional 1,140 people were wounded, said Yildirim. A total of 2,839 military officers were detained, a source in the President’s office said. As the morning wore on, crowds emptied out of Istanbul’s Taksim Square, where many gathered the night before.

The United States has called on all parties in Turkey to support President Recep Tayyip Erdogan’s government against a coup attempt by the military – with other world leaders expressing concern about the upheaval in a Nato member country.

President Barack Obama and Secretary of State John Kerry spoke by phone and gave their support to Mr Erdogan. “The President and Secretary agreed that all parties in Turkey should support the democratically-elected government of Turkey, show restraint, and avoid any violence or bloodshed,” the White House said in a statement.