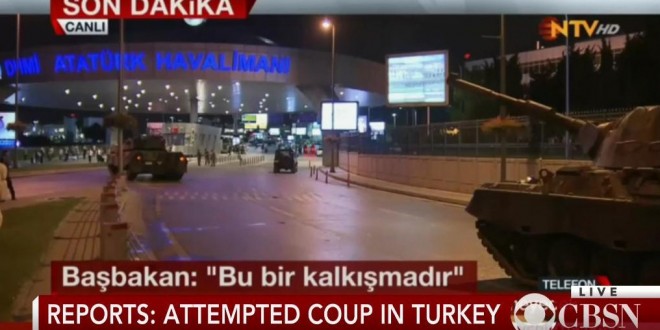 Gunfire was heard and jets were seen flying in the Turkish capital of Ankara on Friday. The apparent incidents immediately piqued interest across the world, as Prime Minister Binali Yildirim said a group within Turkey’s military had attempted to overthrow the government and security forces had been called in to “do what is necessary.”

“Some people illegally undertook an illegal action outside of the chain of command,” Yildirim said in comments broadcast by private channel NTV and reported by Reuters. “The government elected by the people remains in charge. This government will only go when the people say so.” Footage from NTV showed tanks at the entrance to Istanbul’s Ataturk Airport.

The Associated Press is now carrying fuller quotes from the Turkish prime minister’s interview with NTV. Having confirmed his belief that an attempted coup was underway, Binali Yildirim said: “We are focusing on the possibility of an attempt [coup]. There was an illegal act by a group within the military that was acting out of the chain of military command. Our people should know that we will not allow any activity that would harm democracy.” The Dogan news agency said one-way traffic on the Bosporus and Fatih Sultan Mehmet bridges were blocked. Video footage showed the bridge being blocked by military vehicles.

In a statement, the Turkish military claims that it has taken over and that government leadership has been detained. The government denies these claims. A number of ambulances are en route to the Army General Headquarters building in Ankara. Tanks have been spotted at Ataturk airport in Istanbul. Turkish state television is off the air, and Facebook, Twitter, and YouTube access was severed earlier.

#BREAKING: Turkey’s military has just confirmed it has taken over the country, following a coup. #9Today https://t.co/1rDSDuMYIt — The Today Show (@TheTodayShow) July 15, 2016