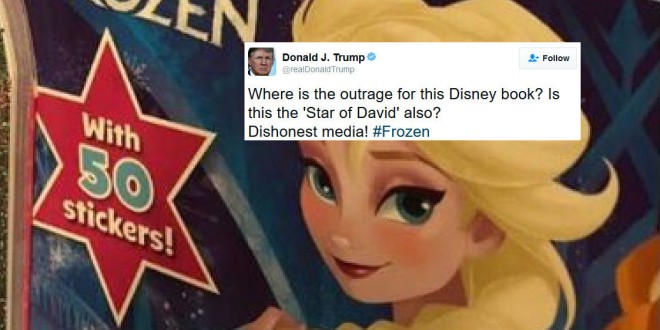 After declaring yesterday that he should have never deleted his anti-Semitic tweet, late last night Donald Trump tweeted out the above front cover of a Disney sticker book. From Politico:

The image used to make the Disney comparison appears to have begun circulating on a Reddit thread devoted to the Republican candidate before making the rounds on social media and other sites sarcastically questioning why the company wasn’t facing the same backlash as Trump.

“We shouldn’t have taken it down. We should’ve left it up. I would have rather defended it,” Trump said at a Thursday night rally in Cincinnati, Ohio. “It’s a star! And it actually looks like a sheriff’s star! It could’ve been a star for anything.”

Do you want to build a strawman? https://t.co/AoeNTJOGpo