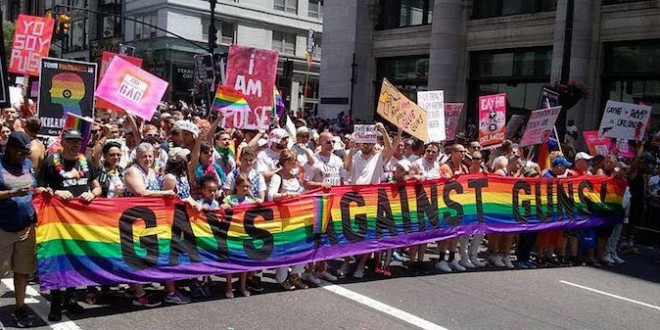 Gays Against Guns, Queer Nation, and other gun control activists groups will stage a join “Stop The Hate, Stop The Guns” protest at 5PM this afternoon outside Trump Tower on Fifth Avenue in Manhattan. The protest is designed to coincide with the opening of the GOP convention and your participation is welcomed. Via press release:

The GOP has drafted what may be its most anti-LGBTQ platform yet — with planks opposing marriage equality and supporting discredited and dangerous conversion therapy. The GOP is also behind the anti-transgender legislation introduced in North Carolina and many other states. That legislation is among more than 200 anti-LGBTQ measures introduced in 34 state legislatures since the start of 2016.

Two days after the killings in Orlando, the House Republican leadership blocked a vote on legislation that would have turned President Obama’s 2014 executive order barring discrimination by federal contractors based on sexual orientation and gender identity into law.

On July 12, the one-month anniversary of the Pulse nightclub massacre, the House held a hearing on the First Amendment Defense Act (FADA), so-called “religious freedom legislation” that would legalize anti-LGBTQ discrimination across the nation. All but one of FADA’s 171 House sponsors are Republicans. Similar legislation in the Senate has 37 sponsors, all Republicans.

Indiana Governor Mike Pence, Trump’s running mate, has been denounced by groups representing the LGBTQ community nationwide as being “notoriously anti-LGBTQ.” His state’s so-called ‘religious freedom’ law made it legal for businesses to discriminate against people based on their sexual orientation or gender identity. Passed last year, the law met with a national backlash. Even so, Pence subsequently defended the law on a national television program and refused to answer — eight times — whether businesses should be able to discriminate against LGBTQ people.

Previous Trump’s Ghostwriter Regrets The Art Of The Deal: I Put Lipstick On A Pig Because Donald Trump Is A Sociopath
Next LIVE VIDEO: Opening Ceremonies At GOP Convention