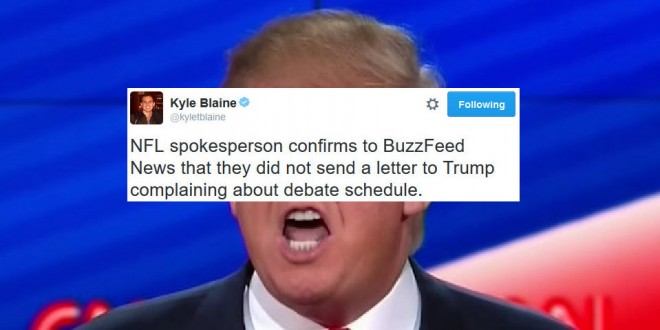 Trump Claims NFL Sent Him Letter Complaining About Debate Schedule, NFL Says They Did No Such Thing

Another day, another ridiculous lie from Donald Trump. CNN reports:

Donald Trump says the fall debate schedule is “unacceptable,” raising the specter that he may try to skip them. In a tweet on Friday night, Trump incorrectly said that Hillary Clinton and the Democrats are “trying to rig the debates.”

In fact, the fall debate schedule was determined almost a year ago by the nonpartisan Commission on Presidential Debates, a private group made up of both Republicans and Democrats. RNC chief strategist Sean Spicer invoked criticism of the commission on CNN Saturday morning, saying “The entire system needs to be relooked at.”

Trump said in an interview for ABC’s “This Week,” “I’ll tell you what I don’t like. It’s against two NFL games. I got a letter from the NFL saying, “This is ridiculous.'”

An NFL spokesman responded Saturday: “While we’d obviously wish the debate commission could find another night we did not send a letter to Trump.” Sporting events, religious holidays, and other factors cause scheduling headaches every four years.