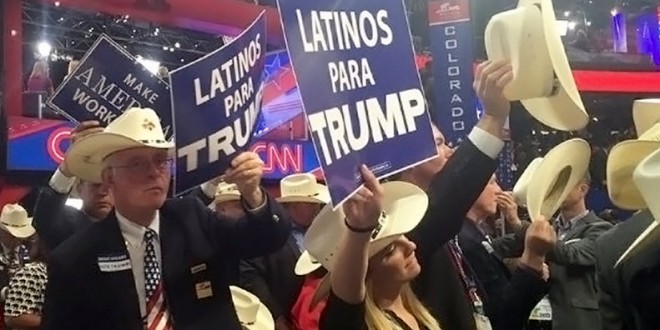 I missed this amusing tidbit on Friday. From the Daily Dot:

Even though Donald Trump doesn’t have the best track record when it comes to Latino issues, at the RNC last night there appeared to be a dedicated group of supporters holding signs that said “Latinos Para Trump.”

Indeed, some questioned whether the group was in fact Latino, though obviously one can be both light-skinned and Latino. The more damning evidence that this group may not be who it claims: Well, that sign’s not Spanish.

The proper grammar for that sign, which translates to “Latinos for Trump,” should be “Latinos por Trump,” not “para.” According to fluent Spanish speakers at the Daily Dot, it’s a common error, especially if Spanish is not your first language. However, it’s a common error that could be solved with a quick Google search.