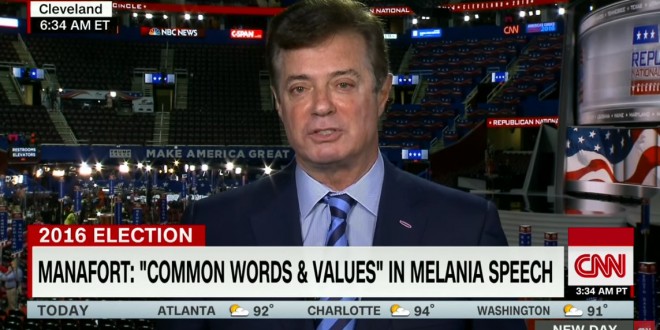 Trump Campaign Denies Plagiarism: Melania Is Being Attacked Because She Threatens Hillary [VIDEO]

Tuesday morning on CNN’s “New Day,” Manafort categorically denied that Melania Trump’s speech had been lifted in any way from remarks by Obama or anyone else. “I thought Melania Trump hit it out of the park when she talked about her love of family, the feeling of an immigrant that comes to this country and succeeds,” Manafort said. “And I thought that the feeling she has towards her husband and her depiction of the real Donald Trump came through loud and clear.”

“There’s no cribbing of Michelle Obama’s speech. These are common words and values that she cares about her family, things like that,” he continued when asked by anchor Chris Cuomo about the plagiarism allegations. “I mean, she was speaking in front of 35 million people last night. She knew that. To think that she would be cribbing Michelle Obama’s words is crazy. This is once again an example of when a woman threatens Hillary Clinton, how she seeks out to demean her and take her down. It’s not going to work.”