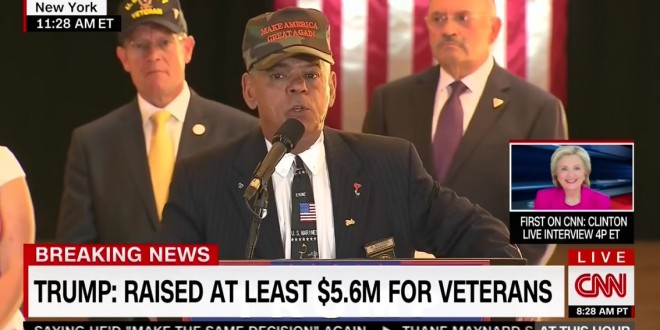 The inevitable result of last night’s demonizing from the podium of the GOP convention. Via the Daily Beast:

It is not enough to simply beat Hillary Clinton, an adviser to Donald Trump’s campaign said. She must be killed.

The theme of the last two nights has been less ‘Make America Safe Again’ or ‘Make America Work Again’ and more ‘Lock Her Up.’ But some of Trump’s most diehard supporters want to go further — they want her to be executed.

“Anyone that commits treason should be shot,” Al Baldasaro, an adviser to the Trump campaign for veterans issues, he told The Daily Beast. “I believe Hillary Clinton committed treason. She put people in danger. When people take confidential material off a server, you’re sharing information with the enemy. That’s treason.”

The mood at the Republican National Convention has turned decidedly ugly — on stage, primetime speaker Chris Christie conducted a mock trial of Clinton, playing to the crowd to convict her, and the crowd repeatedly called for her to be put in jail. Ben Carson tried to tie Clinton to Lucifer in his Tuesday night address.

The photo above is from when Baldasaro defended Trump against reports that veterans groups had not received the millions allegedly raised on their behalf.

Previous Caitlyn Jenner At Log Cabin Event: I Don’t Speak For The Trans Community, I Only Speak For Myself [VIDEO]
Next Melania Trump’s Speechwriter Confesses To Plagiarism, Trump Family Rejects Her Offer To Resign