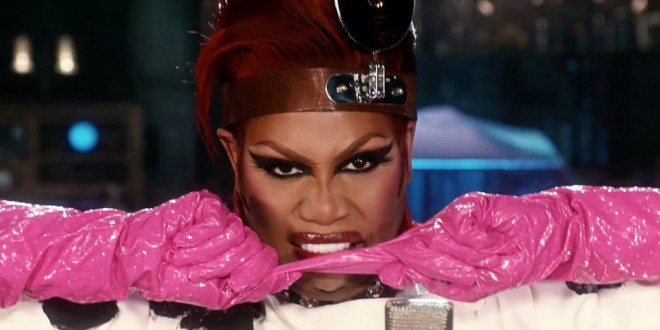 Fox offered up a new trailer for their Rocky Horror Picture Show remake during their Comic-Con panel on Thursday. In the clip, Orange Is the New Black star Laverne Cox – who plays Dr. Frank-N-Furter, the “sweet transvestite from Transsexual, Transylvania,” in the film – vamps it up to one of the musical’s signature tunes, “The Time Warp.”

The minute-long preview also provides a glimpse at “the Criminologist”/narrator played by Tim Curry, who immortalized the role of Frank-N-Furter in the original Rocky Horror stage production and big-screen musical.

The first partial screening was well-received:

Comic-Con fans responded enthusiastically Thursday to a screening of the first 25 minutes of the TV revival of the 1975 camp film classic, The Rocky Horror Picture Show.

They applauded many elements of the first part of the two-hour Fox production — now set for an Oct. 20 premiere — playing along with callbacks made popular during decades of midnight screenings. Some even waved cellphone lights during a rendition of There’s a Light by the naive, innocent Brad (Ryan McCartan) and Janet (Victoria Justice).

The clip closed with two of the original’s highlights, a Time Warp far more intricately choreographed than in the original and a dazzling Sweet Transvestite entrance by the new and much-awaited Dr. Frank-N-Furter (Laverne Cox), clad in shimmery red dress, gloves and high heels. Both numbers drew hearty applause.