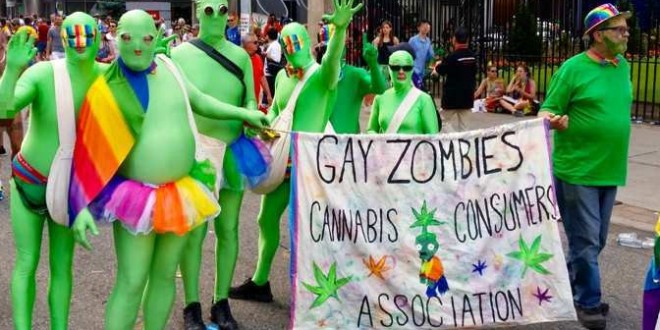 You may recall that they pulled the same stunt at Vancouver Pride in 2014. From the anti-LGBT LifeSiteNews:

Toronto Gay-Pride revelers who thought they were receiving free condoms and sex tips from gay zombies in green skintight suits during the parade on Sunday afternoon were actually receiving info packets about the physical and spiritual dangers of homosexual practices from a group of concerned Christians.

Half-a-dozen Christians led by activist Bill Whatcott paid the $100 fee to parade organizers to register “Gay Zombies Cannabis Consumers Association” so that they could move more easily along the parade route to deliver their message.

The group said their goal in participating in the event was twofold: First, to be a prophetic and unambiguous witness against the unfettered celebration of homosexuality, and second, to offer people caught up in the same-sex lifestyle a way out through a call to repent and to turn to Jesus Christ to be saved.

“Our delivery was a bit creative,” said Whatcott to LifeSiteNews, “but, we wanted to give people this message because it is truthful.”

Whatcott claims to have handed out thousands of fake condoms. Here’s part of the enclosed message:

Natural law is clear, homosexuality is incompatible with human nature. Disease, death and confusion are the sad and sordid realities of the homosexual lifestyle. The ‘Gay Zombies’ are concerned about the spiritual, psychological and physical welfare of all potential homosexual pride attendees, so we want to give you this accurate information and encourage you to abstain from the homosexuality. The rejection of true marriage is also in direct opposition to God’s law and it is our duty to warn you that those who choose to rebel against the God who created them, do so to their eternal peril. For those reading this Gospel package we also want to let you know there is a God who loves you, and who is real, and who has made a way for you to come to Him.

At their Vancouver stunt, the fake condom packages also included gruesome photos of emaciated AIDS patients. From my 2014 post:

Whatcott bragged, “Trojan condoms also was kind enough to donate 500 of their not safe enough latex condoms to my contingent, so we used them as a cover for our Gospel condoms that if read correctly and applied properly will guarantee you truly “safe sex” as in life long heterosexual marriage and also eternal life in the world to come. The bags my two activists Darcy and Jonathan are carrying in the video contain life saving and soul redeeming Gospel condoms. Thanks to the generosity of Trojan condoms we were able to cover up our Gospel condoms with a layer of Trojan condoms and avoid detection while we evangelized the entire parade route!”

According to Whatcott, only one parade-goer opened a fake condom in his group’s presence. When she became visibly upset at the message inside, one of Whatcott’s co-conspirators lied for Jesus and told her that she’d been mistakenly given the condom that he’d been handed by a “homophobe” at the parade. He then gave her one of the real condoms that they had fraudulently obtained from Trojan.

Previous Paul Ryan: The FBI Has Damaged The Rule Of Law By Not Charging Hillary Clinton For Her Criminal Actions
Next Sarah Palin Attacks #NeverTrump Traitors For Helping Hillary “Snuff Liberty’s Life Out Of We The People”