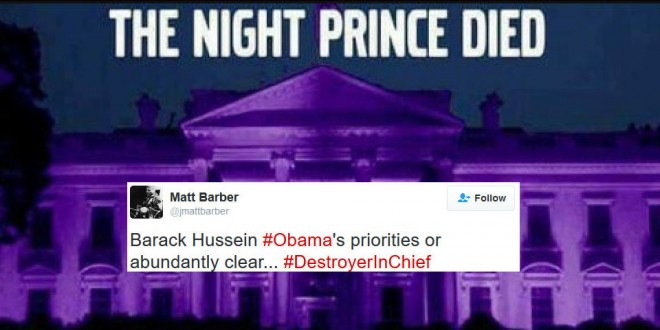 Remember when the Liberty Counsel faced national humiliation over their quickly debunked lie that 100,000 Peruvians had gathered in a soccer stadium to pray for Kim Davis? Well, last night Matt Barber may have outdone that ridiculousness when he tweeted out a poorly photoshopped image which claims that not only did our Kenyan usurper illuminate the White House in rainbow colors to celebrate the Obergefell ruling, he lit the White House in purple to mark the passing of Prince.

But what our Marxist leader DIDN’T do, according to Barber’s tweet, is take similar action to lament the attack in Dallas. (In fact, the president ordered the nation’s flags, including, obviously, those at the White House, to fly at half-staff.) I pointed out Barber’s lie within minutes of his post, but at this writing he hasn’t deleted it. Snopes piled on this morning with their own debunking. If there’s an issue Matt Barber won’t lie about, we’ve not yet seen it.

UPDATE: Barber has finally deleted his tweet. Here’s the image he posted.