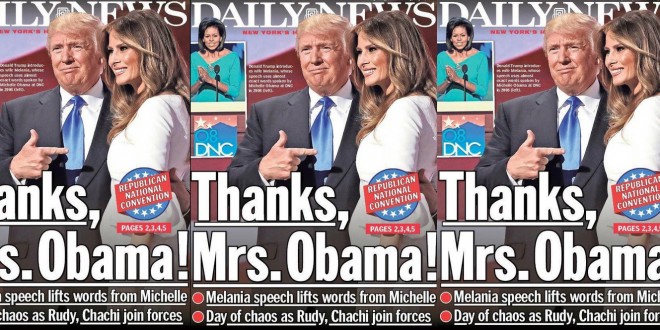 Melania Trump’s first major stump speech for her husband and White House hopeful Donald Trump was supposed to be uplifting, but instead appeared to have lifted lines from First Lady Michelle Obama.

A portion of Melania’s address to the Republican National Convention, praising values and hard work, on Monday was eerily similar to the speech delivered by Obama at 2008’s Democratic National Convention. Hours before the speech, on the NYC couple’s private jet, Melania Trump excitedly told NBC journalist Matt Lauer that she wrote the speech with “a little help.”

“I read over it and that’s all,” she told Lauer, who asked if she went over her address with the presumptive Republican nominee. “Because I wrote it with a little help as possible.” She teamed up with an unnamed speechwriter, who worked with Trump for the past five to six weeks, CNN reported.

Melania Trump’s braggart, billionaire husband hyped her big moment on Fox News and to his legion of Twitter followers leading up to Monday night. He continued to praise his wife’s spotlight speech, cheered by Republican delegates, as rumors of plagiarism surfaced. “Her speech and demeanor were absolutely incredible,” he wrote. “Very proud!”

Below is what was supposed to be today’s cover before the Melania flap.