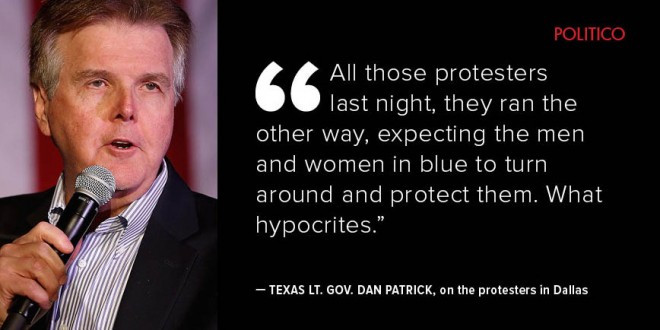 From the Dallas News:

Lt. Gov. Dan Patrick called protesters who ran away from the hail of bullets that rained down on Downtown Dallas on Thursday night “hypocrites” during an interview Friday on Fox News.

“All those protesters last night, they turned around and ran the other way expecting the men and women in blue to protect them. What hypocrites!” an audibly emotional Patrick said.

As Gov. Greg Abbott issued on open letter calling on Texans to calmly unite and come together, Patrick took a more combative tone. He blamed Black Lives Matter protesters for the violence against police and said people “with big mouths are creating situations like we saw last night.”

“We have to have their back,” Patrick said of police. “And I’m sick and tired of those who are protesting our police and putting their lives in danger.”

You’ll recall that on the morning of the Pulse massacre, Patrick tweeted, “A man reaps what he sows.”