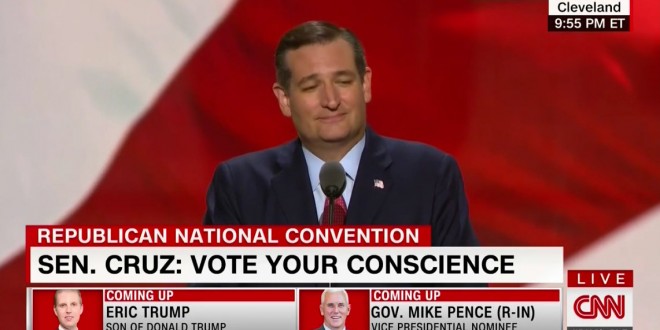 Ted Cruz just became the first primetime speaker of this Republican convention to be booed off the stage.

The Texas senator mentioned Donald Trump’s name just once during his Republican convention speech — and it wasn’t even an endorsement.

“I want to congratulate Donald Trump on winning the nomination last night,” the Texas senator said, addressing the Cleveland gathering on its third evening. “And like each of you, I want to see the principles that our party believes prevail in November.”

And then Cruz, whose primary battle with Trump turned increasingly bitter when the billionaire businessman attacked Cruz’s wife and his father, pivoted to this: “Conventions are times of excitement. But given the events of the last few weeks, I hope you’ll allow me a moment to talk to you about what’s really at stake.”

When delegates from New York loudly urged Cruz from the convention floor to “say it” — referring to endorsing Trump — the Texas senator only responded: “I appreciate the enthusiasm of the New York delegation.” Cruz then exited to loud booing from the crowd.

HEIDI CRUZ escorted out by security as crowd gets angry at Cruz for his speech. One Trump supporter shouting "Goldman Sachs!" at her