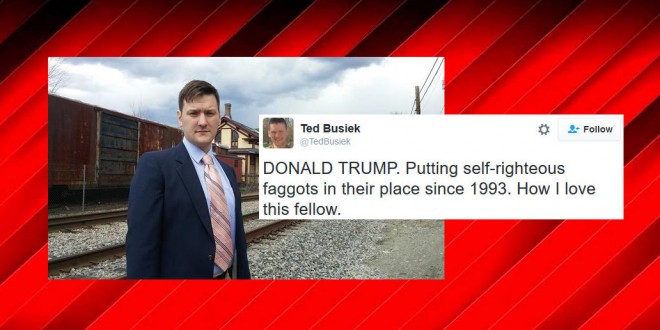 State Sen. Jamie Eldridge, D-Acton, said Republican challenger Ted Busiek of Littleton should apologize and consider dropping out of the race after a remark Busiek made on Twitter July 2. Referring to a short video clip of Donald Trump parrying with Congress about federal tribal gaming policy, long before Trump’s successful bid for the Republican presidential nomination, Busiek wrote, “DONALD TRUMP. Putting self-righteous (slur for gay people) in their place since 1993. How I love this fellow.”

Busiek said he didn’t intend the term in a “hateful sense” or to imply that the congressman was gay, using the word instead to mean the congressman was “obnoxious” and was “kind of being a jerk.” Busiek, 30, who served four years in the Air Force, said so-called “social justice warriors” would “probably have a heart attack” listening to him and his friends talk, though he said it would be “very unlikely” that he would use such terminology publicly if elected to the state Senate.

On his campaign site Busiek calls for a mandatory $30/hour minimum wage for “non-naturalized foreigners.” So, ya know, only the “right” people ever get hired. He also calls for an end to all affordable housing programs because helping poor people find a place to live is just “vote buying” by the Democrats. His Facebook page is getting some attention today. (Tipped by JMG reader David)

Previous Scamvangelist Jim Bakker Has Forgiven The People Who Sent Him To Prison For Ripping Them Off [VIDEO]
Next BECAUSE OF COURSE: GOP House Reps Call For Independent Investigation Into Hillary’s Email Server