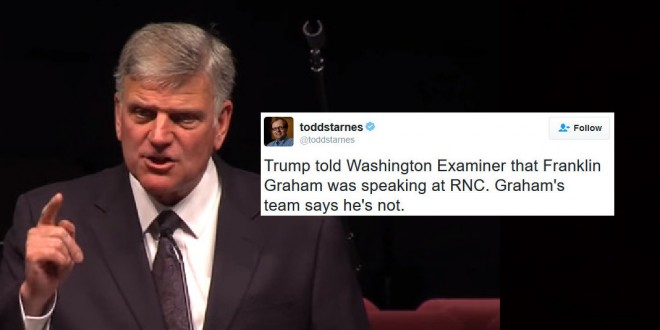 Yesterday Tim Tebow declared that despite being named as one of the speakers at the GOP convention, he was never asked and will not be doing so. As you can see from the above tweet from Todd Starnes, anti-LGBT evangelist Franklin Graham is also surprised to hear that he will be speaking at the convention. Here’s what Trump said yesterday to the Washington Examiner:

Trump said he hopes people will be inspired as they come out of the GOP convention next week. The speaker list for the four-day event includes sports celebrities and high-profile GOP leaders. Trump described the set list as a roster of “winners.”

“You know, when you have [Ultimate Fighting Championship President] Dana White and you have some of the people we have on. Franklin Graham is going to be speaking and so many different people,” he said. ”

We have [retired Indiana college basketball coach] Bobby Knight, Coach Knight, who helped me so much in Indiana and elsewhere. I don’t know, I think it’s a really great group of speakers.”