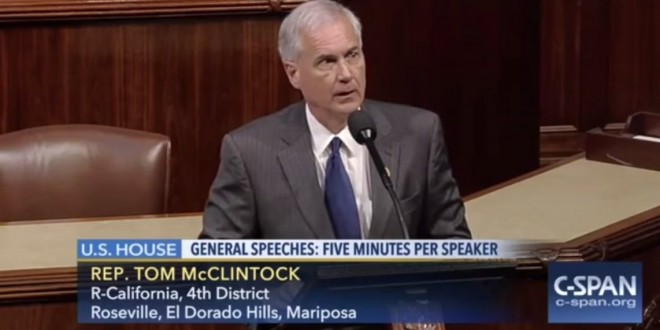 Rep. Tom McClintock, a member of the House Tea Party Caucus, wants Democrats sanctioned for their “illegal” sit-in in support of gun control. From the transcript of the clip below:

“The Constitution provides that the House may sanction members for disorderly behavior and the members responsible for the events of June 22 and 23 must be called to account for their actions, if we fail to do so we will have replaced the House rules with rules for radicals.

“In complete contempt for the House and the rule of law they shouted down all with whom they disagreed, they blocked access to the microphones as members sought to address the chair and they illegally occupied the hall of the House – forcing an early adjournment and costing this House three full days of legislative deliberations.