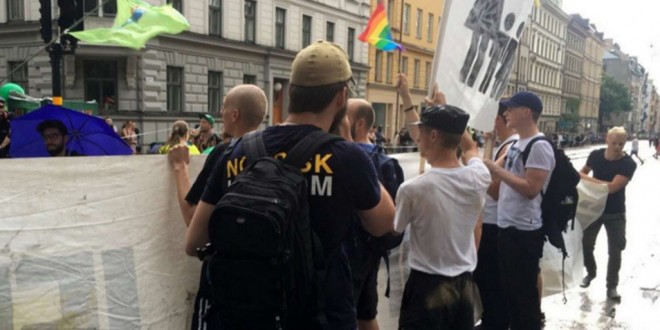 Speaking to Göteborgs-Posten, spokesman Fredrik Hagberg confirmed that the group had attempted to counter protest during the festivities leading to a scuffle. He said: “We were there to demonstrate against Pride. We need a critical voice that demonstrates in the name of the traditional family values. We think that they are threatened. Pride encourages things that harm the traditional family values. It’s not about love any longer.”

Despite police having the situation under control, Expressen newspaper reporter Tomas Kvarnkullen said Pride-goers were “lucky” that something worse had not broken out. He said: “There were only three or four police officers close by who tried to fend off the group. Police beat the group with batons.”

Several days ago homocon extremist Milo Yiannopoulos called off his planned demonstration in Sweden. Via Breitbart:

Breitbart News has cancelled Milo Yiannopoulos’ tour stop in Sweden this week after a security evaluation showed a significant threat to Yiannopoulos’ life.

Yiannopoulos was scheduled to lead a gay pride march through one of Sweden’s Muslim ghettos, however following an intensive security review and threat assessment by Breitbart’s security team, comprised of former Navy SEALs and intelligence community operatives, Breitbart has been forced to cancel the trip.

The security analysis found significant potential threats against Milo, especially in light of the recent wave of Muslim terror attacks across Europe.

“After a briefing by our security team and a review of the situation in Sweden, Breitbart News has cancelled Milo’s appearance at the Pride Järva parade on Wednesday, July 27. Despite Milo’s request to honor his commitment we are not confident that we could ensure his safety,” said Executive Chairman of Breitbart News, Stephen K. Bannon.

“His brand of unique cultural warfare is too valuable to risk it in potentially life-threatening situations. Milo receives dozens of death threats from Muslims, many of them in Arabic, every day across his various social media accounts,” he explained. “The frequency of these threats has been increasing recently.”

The video below was posted by Nordic Youth.