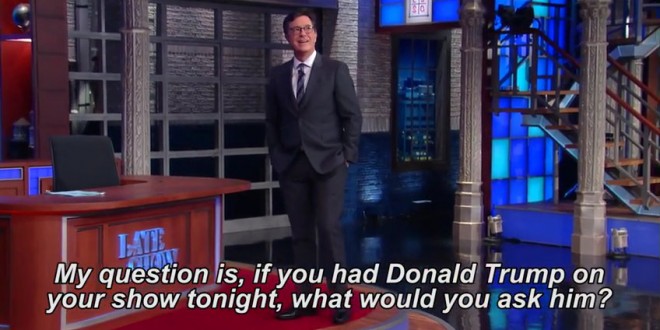 Stephen Colbert’s One Question For Donald Trump: What Does Putin’s Dick Taste Like? [VIDEO]

Whoever had “What does Vladimir Putin’s dick taste like?” on the Bingo card of things that comedian Stephen Colbert wants to ask Donald Trump just won YUGE.

That was the response that the Late Show host hysterically and inextricably gave to a young woman in the audience of Wednesday’s show who wondered what the real estate mogul would be asked if he appeared on the program.

“My question is,” began the unnamed college student, “if you have Donald Trump on your show tonight, what would you ask him?”

Previous Liberty Counsel Yanks Support For FADA Because New Language Also Legalizes Anti-Straight Discrimination
Next Donald Trump: I Was Only Being Sarcastic When I Invited Russia To Spy On Hillary Clinton [VIDEO]