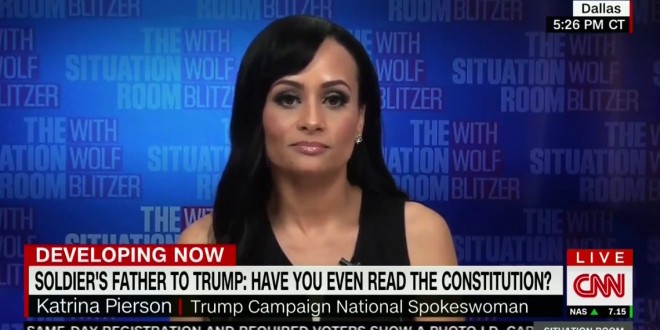 Spox: Trump Won’t Meet With Father Of Slain Soldier Because He Doesn’t Like To Make Headlines [VIDEO]

Trump’s national campaign spokeswoman Katrina Pierson said it was unlikely that the GOP nominee would reach out to Khizr Khan, the Muslim-American father of a deceased veteran who spoke at the DNC Thursday night, because Trump doesn’t like to make headlines.

Speaking to CNN’s Wolf Blitzer Friday evening, Pierson said it was “truly unfortunate” that the Democrats put Khan onstage because all it did was deepen division.

When Blitzer asked Pierson a second time if Trump would reach out to the Khan family to thank them for their son’s service, she responded, “Well, Mr. Trump has thanked everyone for their service.” She added that such a gesture would be “just another opportunity to make headlines and Mr. Trump doesn’t like to do that, particularly with matters of the heart.”

Khizr Khan appeared on MSNBC’s “Last Call With Lawrence O’Donnell” on Friday with his wife Ghazala Khan and said there were two other individuals he wanted to address: Senate Majority Leader Mitch McConnell and House Speaker Paul Ryan. Khan called both men “patriots” and “decent human beings” and appealed to them: “Isn’t it time to repudiate Trump?” The father of fallen U.S. Army Capt. Humayun Khan called it “moral imperative” that both leaders tell Trump “enough.” “You are about to sink the ship of the patriot Republicans,” he warned. “If your candidate wins and he governs the way he has campaigned, my country, this country, will have constitutional crises [like] never before,” Khan said.