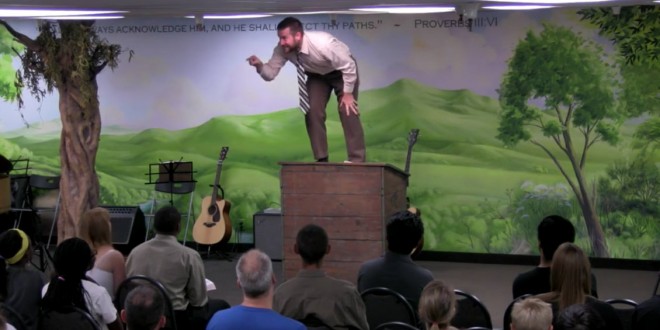 As you’ll see in the video below, infamous hate Pastor Steven Anderson is furious that every one of his reserved venues in Johannesburg, South Africa have either canceled his “soul winning” events in September or declared that they will ban him from their premises. According to Anderson, the cancellations were made due to pressure from “sodomites.” (Go sodomites!) He is particularly angry with the Premier Hotel and has asked his supporters to flood review sites and the hotel’s social media accounts with negative reviews.

Anderson made national headlines last month for celebrating the Pulse massacre, telling parishioners that there are now “fifty less pedophiles in the world.” Several days later he had a screaming meltdown when PayPal and several other online money services canceled his accounts. Anderson also earned widespread notice in years past for calling on God to murder President Obama and for demanding that the government execute all homosexuals.

But Pastor Anderson’s problem in securing venues may be the least of his worries as there is also a petition campaign to have him banned from even entering South Africa, which has a constitutional ban on anti-LGBT hate speech under the Promotion Of Equality & Prevention Of Unfair Discrimination Act, which went into law in 2000.