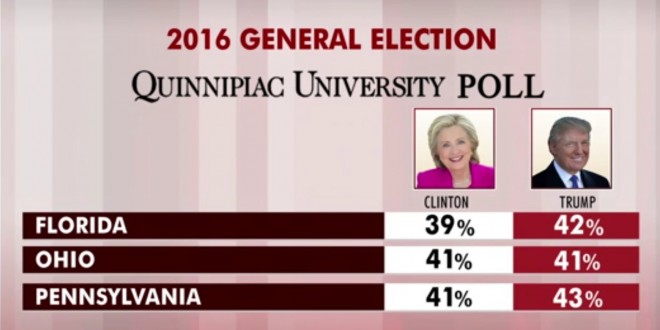 Did Donald Trump really just surge past Hillary Clinton in two of the election’s most important battlegrounds?

New swing-state polls released Wednesday by Quinnipiac University show Trump leading Clinton in Florida and Pennsylvania — and tied in the critical battleground state of Ohio. In three of the states that matter most in November, the surveys point to a race much closer than the national polls, which have Clinton pegged to a significant, mid-single-digit advantage over Trump, suggest.

Thank you Florida, Ohio, and Pennsylvania! #CrookedHillary is not qualified. #ImWithYou pic.twitter.com/M1yzgyeEdY

We know the battlegrounds are going to be close til the end. That's why we need to keep working so hard. Trump is a serious danger, folks.