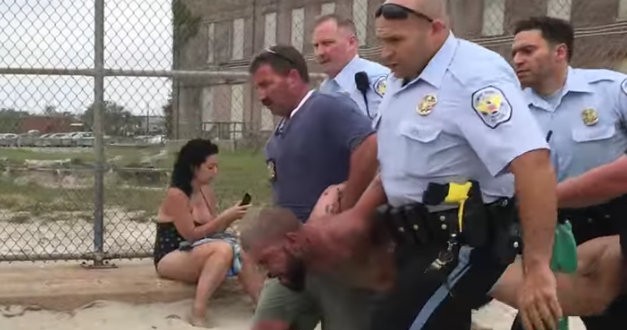 In a video obtained by Mic, a group of police officers carried Brooklyn-based photographer Krys Fox off the beach, still naked, with only a towel to cover his genitals. Fox’s photography includes several snaps of men by the same chain link fence where he was arrested. Fox also told Mic that the beach was the site where he got married.

“I got married in 2011 at the same spot that it happened,” Fox said to Mic in a phone interview. “And I will never be able to be there again without remembering what they did to me.”

Fox had been photographing a friend at approximately 6:30 p.m. yesterday evening when the towel tied around his waist slipped off. He didn’t have anything on underneath.

That’s when a gaggle of cops ran up to him, including at least three who were plain-clothed, and hoisted Fox into the air and carried him off to the police car where we was arrested and taken to jail. He was held for several hours.

They didn’t allow him to put his clothes or towel back on before they paraded him through the beach horizontally for all to see. “It was very quick and very scary,” Fox told me. A bystander, Mariel Reyes, captured the whole scene on video. She described the incident as, “Absurd, excessive, fucking ridiculous.”

“Jacob Riis Park has been a safe and peaceful haven for LGBT beachgoers for decades. I find any harassment of beachgoers at Jacob Riis and the overwhelming display of force demonstrated by the United States Park Police yesterday to be utterly repugnant. It also seems to be an enormous diversion of resources. I’d hazard a guess that our police have more pressing concerns in this day and age than arresting a nude sunbather at a gay beach.

“The National Parks Police should be ashamed. Just last week we designated Stonewall as a National Monument. Based on news accounts, I hope the police apologize to Mr. Fox and any pending charges against him are dropped.”

NOTE: Jacob Riis Beach is particularly popular with the bear community and several friends of mine witnessed the arrest. All of them say no other beach-goers were nude and they support Fox’s account of having changed into a towel because his bathing trunks were wet.