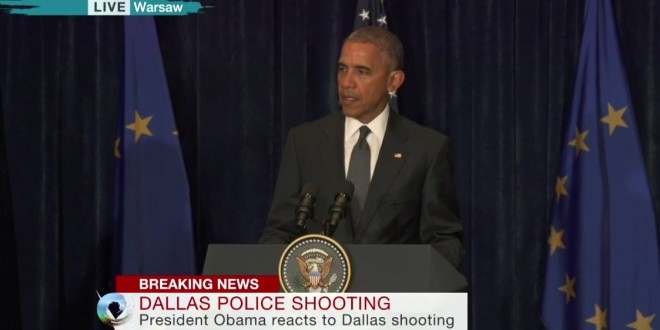 Obama On Dallas Shooting: This Was A Vicious, Despicable Attack On Law Enforcement [VIDEO]

President Barack Obama said Friday that the nation was “horrified” after what he called “a vicious, calculated and despicable attack on law enforcement” in Dallas.

It was the second somber statement about shootings on American soil the President made from Europe in less than 12 hours. He condemned the recent shootings by police of black men in Minnesota and Louisiana shorty after arriving in Europe and made and a broad diagnosis of American racial imbalance. Hours later, after chaos erupted in Dallas and five police officers were killed in sniper shootings that began during protests stemming from the Minnesota and Louisiana shootings, he promised justice.

“There is no possible justification for these kinds of attacks or any violence against law enforcement,” Obama said, speaking from the NATO summit in Poland that he is attending. “Anyone involved in the senseless murders will be held fully accountable. Justice will be done.”

Obama’s overseas trip comes at a time when the country has been shaken by violence, during a week with fatal clashes between police and communities of color, ending with the shootings in Dallas, the single deadliest day for law enforcement since September 11, 2001.