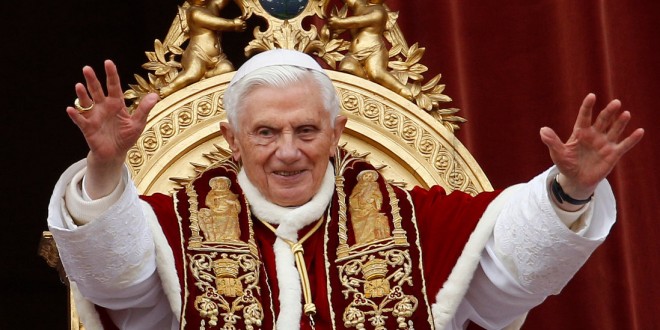 Pope Benedict: I Broke Up The Vatican’s Gay Lobby

Former Pope Benedict says in his memoirs that no-one pressured him to resign but alleges that a “gay lobby” in the Vatican had tried to influence decisions, a leading Italian newspaper reported on Friday.

The book, called “The Last Conversations”, is the first time in history that a former pope judges his own pontificate after it is over. It is due to be published on Sept. 9.

In the book, Benedict says that he came to know of the presence of a “gay lobby” made up of four or five people who were seeking to influence Vatican decisions. The article says Benedict says he managed to “break up this power group”.

Benedict resigned following a turbulent papacy that included the so-call “Vatileaks” case, in which his butler leaked some of his personal letters and other documents that alleged corruption and a power struggle in the Vatican.

More from Catholic site The Crux:

This is the first time a pope, or a pope emeritus, has acknowledged on the record that the Vatican either has or had a “gay lobby”. Pope Francis reportedly said one existed soon after his election in 2013, when he had a private meeting with the leaders of the Latin American Confederation of Religious Orders (CLAR).

Yet the Vatican said that encounter was a private one, and CLAR released a statement saying the words couldn’t be attributed to the pope.

Soon afterwards, on a flight back from Brazil in July 2013, when he delivered his famous “Who am I to judge” soundbite, Francis was dismissive of the idea of a lobby, saying that even though much has been written about it, “I still haven’t found anyone with an identity card in the Vatican with ‘gay’ on it.”

He distinguished between a person being gay and forming a lobby, saying, “[A gay lobby] is not good.”

In effect, what Vatican-watchers mean by a “gay lobby” is a network of gay clergy who protect one another’s secrets and try to help one another inside the system.

Previous WaPo Reporter Grills Lynch On Private Meeting With Bill Clinton: What On Earth Were You Thinking? [VIDEO]
Next TOMORROW: Hillary To Meet With FBI On Email Server