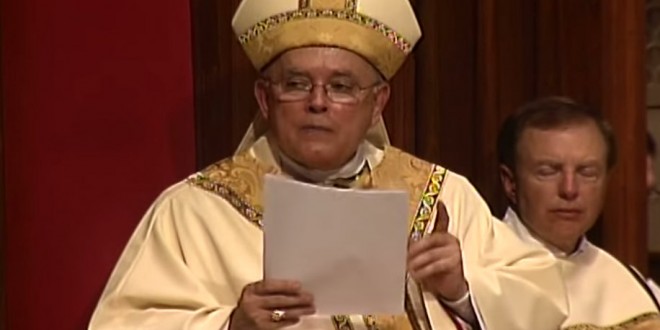 And apparently gays should just get opposite-married anyway. Philly.com reports:

Divorced and civilly remarried Catholics, as well as cohabitating unmarried couples, must “refrain from sexual intimacy” to receive Holy Communion in the Archdiocese of Philadelphia, Archbishop Charles J. Chaput has asserted in a new set of pastoral guidelines.

Released Friday, the guidelines instruct clergy and other archdiocesan leaders on implementing Amoris Laetitia, a major document on family that Pope Francis issued in April.

His six-page instruction, which appears on the archdiocesan website, may be the first of its kind issued by the bishop of any American diocese in response to Amoris Laetitia, Latin for “the joy of love.”

Acknowledging that it is a “hard teaching,” Chaput goes on to say that Catholics in same-sex partnerships, those remarried without a church annulment, and cohabitating persons may not serve on parish councils, instruct the faithful, serve as lectors, or dispense Communion.

In its examination of homosexuality, the Philadelphia guidelines state that two people in an “active, public same-sex relationship, no matter how sincere, offer a serious counter-witness to Catholic belief, which can only produce moral confusion in the community.

“Those with predominant same-sex attractions are therefore called to struggle to live chastely for the kingdom of God. In this endeavor they have need of support, friendship and understanding if they fail,” the rules state.

In years past Chaput has organized buses for his parishioners to attend NOM’s hate rallies in Washington DC.

Previous Sen. Joni Ernst Pulls Out Of Trump Veepstakes
Next Trump Shrugs Off Veepstake Bailers: I’ve Got Ten Names And Some Of Them You Don’t Know About Yet