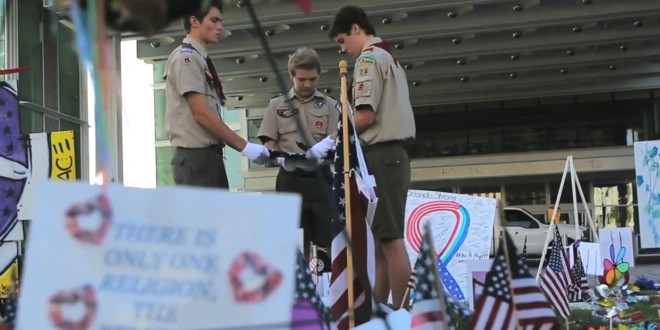 Michelangelo Dominguez’s mother watched with pride Monday morning as the 13-year-old and other Boy Scouts picked hundreds of weathered American flags from the lawn outside the Dr. Phillips Center in Orlando.

He helped collect mini-flagpoles stuck in the dirt around wet teddy bears and melted candles left for the 49 victims killed more than a month ago in the Pulse nightclub shooting.

Officials from the Orange County Regional History Center oversaw the Scouts, who were asked to collect the flags so the American Legion can give them a proper retirement ceremony.

Michelangelo’s mother said tears filled her eyes when her son led the Pledge of Allegiance before the group. After his pledge, three Scouts put on white gloves, carefully stepped past smeared signs scrawled with words of love and hope, and properly folded a flag that had been laid on the grass.

All of the non-perishable tribute items left at memorial sites around Orlando are being collected by the History Center for inclusion in a permanent memorial. Hit the link above for a video about the ceremony screen-capped above.