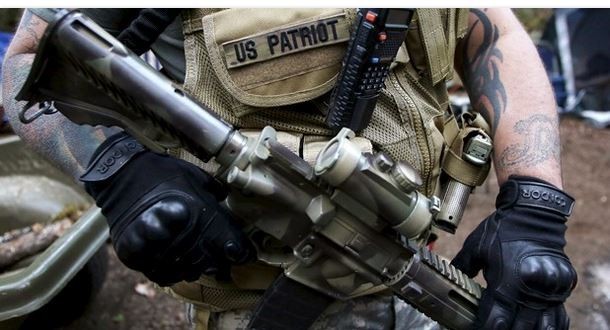 Stewart Rhodes, head of the Oath Keepers, a heavily-armed self-described “Christian militia,” yesterday responded to the attack in Dallas by calling for all patriotic Americans to join militias themselves. Right Wing Watch has his statement:

I call on all Oath Keepers, and all patriotic Americans, to come to the aid of their local police, and to the aid of their communities, and unite and coordinate in mutual defense against this orchestrated campaign of Marxist terrorism, which is the modern version of the wave of terrorism we saw in the late 60s and early 70s by the Marxist Weather Underground and related groups (who also frequently targeted police), along with the closely related Jihadist terrorism offensive, with Orlando being merely the latest in an ongoing wave of attacks.

What is now needed, more than ever, is the reestablishment of the militia of the people, trained, equipped and organized in each town, to defend against what is now clearly a “Tet Offensive” American style, as Navy SEAL veteran Matt Bracken warned. While we work to reestablish that militia system, you must go armed at all times, and be prepared, at all times, to defend your community against these Marxist terrorists as well as their Islamist terror allies. Remember, they are in league, and you are their common enemy and their common targets.

The power elites who control, aid, abet and fund these terrorists will attempt to use these attacks to further destroy what little is left of our Constitution, but the one thing they do not want, and the one thing they truly fear, is for We the People, who are still armed, to come together and restore the militia of the several states. And the elites’ terrorist proxies among the Marxists and Islamacists also fear such a revitalization and restoration.

So, let’s do what our enemies all fear most. Let us resurrect and restore the militia system of this nation, which the Founders told us is necessary for the security of a free state, and which must consist of ALL of the able bodied citizens of your community. It is time to finally get down to doing what is necessary. It starts with you and your neighbors coming together, now, to address this grave threat, and for you to lead them toward the only constitutional solution – the revitalization of the militia.

Last year members of the Oath Keepers appeared in Ferguson, Missouri to “help” local police quell civil unrest. Later in the year they offered to assemble in Kentucky to defend Kim Davis from rearrest. They canceled that action on the request of the Liberty Counsel.

According to the Southern Poverty Law Center, the Oath Keepers are affiliated with the white supremacy movement.