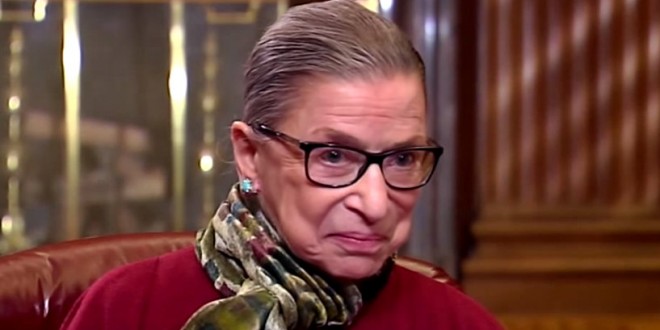 Notorious RBG: Whoever The Next President Is, SHE Will Have A Few SCOTUS Appointments To Make

Justice Ruth Bader Ginsburg says she doesn’t want to think about the possibility of Donald Trump winning the White House, and she predicts the next president — “whoever she will be” — will have a few appointments to make to the Supreme Court.

In an interview Thursday in her court office, the 83-year-old justice and leader of the court’s liberal wing said she presumes Democrat Hillary Clinton will be the next president. Asked what if Republican Donald Trump won instead, she said, “I don’t want to think about that possibility, but if it should be, then everything is up for grabs.”

That includes the future of the high court itself, on which she is the oldest justice. Two justices, Anthony Kennedy and Stephen Breyer, are in their late 70s. “It’s likely that the next president, whoever she will be, will have a few appointments to make,” Ginsburg said, smiling.

She didn’t sound as though she is preparing to step down soon and shows no signs of slowing down. Ginsburg said she has been catching up on sleep since the court finished its work last week before a busy summer of travel that will take her to Europe and, as is her custom, to see as much opera as she can fit in.

Whoever she will be.