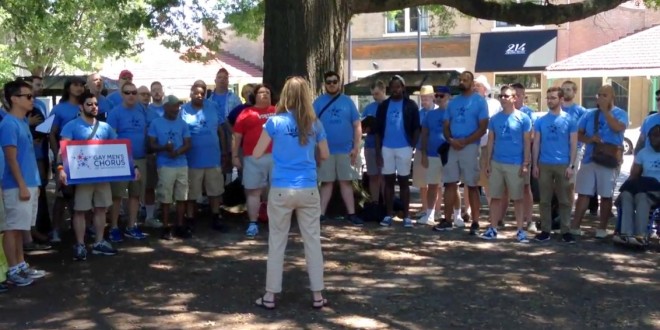 Playbill reports that North Carolina’s Triangle Gay Men’s Chorus and the Gay Men’s Chorus of Washington were performing in a Raleigh park when nearby street preachers began shouting bible verses calling for their deaths. They write:

A local resident, Elizabeth Breakey, captured the incident on video and posted on Facebook, where she wrote, “This particular moment in Moore Square was one of the most amazing things I’ve experienced. As the choir began to sing, anti-gay protesters, about 30 feet away, started to scream out their hateful rhetoric, demanding the deaths of LGBT people in accordance with their God’s laws. I’ve never heard such blatantly violent hate speech. I was in tears. And yet, these brave men stood directly in front of them and performed with pride, courage and conviction a song that perfectly sums up the battle. After such a horrible week, where anti-gay hate-speech and legislation created a monster who murdered 49 men and women, it’s a beautiful thing to see people stand up with courage in front of those that would see them dead and sing with kindness in their heart.”

The song is Make Them Hear You, the final number from 1998’s Tony-winning musical, Ragtime.