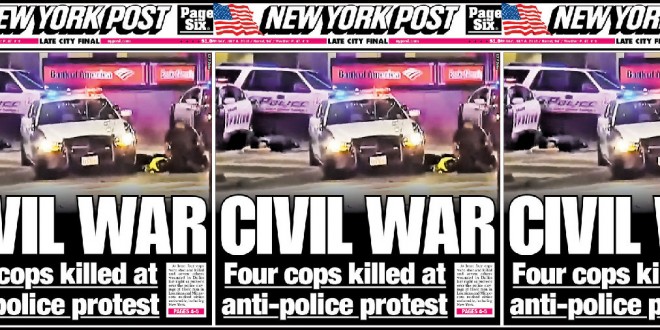 The more conservative of the New York City tabloids is under fire this morning for its choice cover following the tragedy that unfolded late last night in Dallas.

The reaction on social media was swift, with some decrying the sensationalized Post cover as race-baiting and editorially irresponsible.

The headline implies that a national civil war is now underway between the African American community and members of law enforcement following the dramatic week in headlines that saw the deaths of Alton Sterling and Philando Castile at the hands of white police officers.

Sterling was killed in a convenience store parking lot in Baton Rouge on Tuesday; the aftermath of Castile’s death was livestreamed to Facebook by his girlfriend after a routine traffic stop in Minnesota turned deadly.

Previous Trump On Dallas: We Must Restore Law And Order
Next Former Tea Party Rep. Joe Walsh Tweets Threat Against President Obama: Real America Is Coming After You