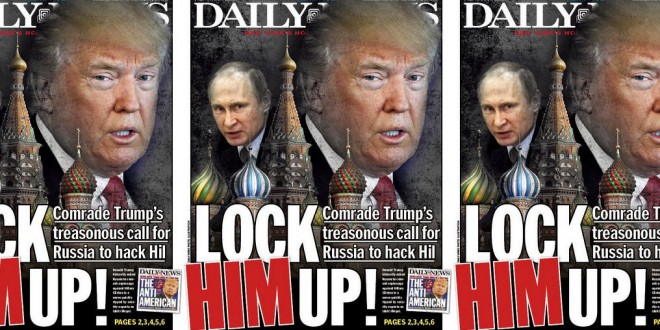 He is running for President of the United States, right? Donald Trump on Wednesday urged Russian hackers to find the thousands of emails his Democratic rival Hillary Clinton erased from her private server, putting more scrutiny on the “bromance” between the Republican nominee and Russian President Vladimir Putin.

“Russia, if you are listening,” he told reporters, “I hope you are able to find the 30,000 emails that are missing. I think you will probably be rewarded mightily by our press.”

“Hacking email is a criminal activity,” he told Politico. “And he’s asked a foreign government — a murderous, repressive regime — to attack not just one of our citizens but the Democratic presidential candidate? Of course it’s a national security threat.”

Previous RUMOR: Megyn Kelly Might Jump From Fox To CNN
Next DAUGHTER SUMMIT: Chelsea Would Meet With Ivanka To Discuss The Tone Of The Campaign [VIDEO]