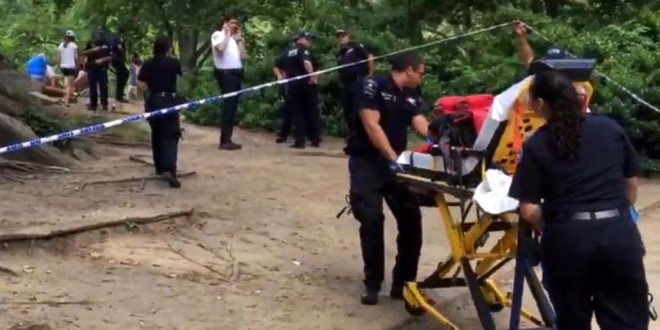 The explosion happened close to a memorial service for Holocaust activist Elie Wiesel, but despite what some are saying on Twitter, there’s no evidence that the incident is related. ABC News reports:

A man was severely injured in an explosion in New York’s Central Park today, but it was not yet clear what caused the blast, police said.

Three men were walking in an area of the park not far from the entrance to the Central Park Zoo when the explosion occurred, severing the foot of one of them, an New York Police Department spokesperson said.

The man was taken to Bellevue hospital with a “possible amputation,” a Fire Department of New York spokesperson said. The spokesperson would not speculate on what caused the explosion, but police said it was likely fireworks, given that Monday is the Fourth of July.

The NYPD bomb squad was on the scene, and a portion of the park was closed for the investigation, police said.

The FDNY confirmed that the man had a “partial amputation” around 10:50 a.m. in the park near 5th Avenue and E 68th Street. Initial reports and witnesses at the scene indicate he lost his foot (and possibly part of his leg) in the explosion. Some witnesses claim it was a firework that caused it; one witness told CBS that the man “was climbing a rock structure and stepped on something that ‘exploded.'”

Outside Eli Wiesel’s funeral I heard a huge explosion just now. Running into Central Park and found a young man with his left leg blown off