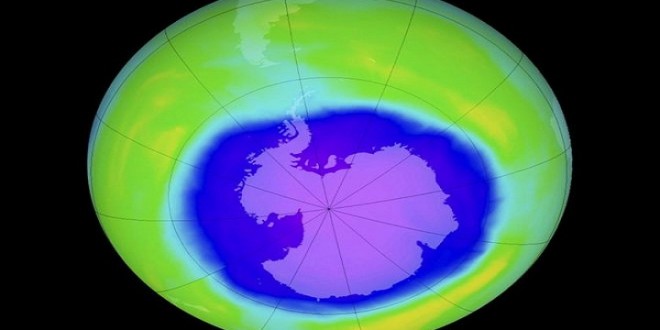 For the first time in 30 years, the gaping hole in the ozone layer above Antarctica is showing signs of healing.

Every year since it was discovered in 1985, scientists have watched the hole grow bigger from one Antarctic spring to the next, eventually covering 10.9 million square miles in 2015.

Now researchers are noting an encouraging trend. Though the hole still exists and reached a record size last year, it is forming at a slower rate, according to a report published Thursday in the journal Science.

Thanks to human actions to curb the use of ozone-destroying chloroflourocarbons, or CFCs, the hole has started growing later in the spring, the study’s authors said, and they can foresee a time, around the middle of the century, when it’s gone.

“We are starting to see signs of improvement over Antarctica,” said Paul Newman, an atmospheric scientist at NASA’s Goddard Space Flight Center who monitors the hole but was not involved in the study.

Earth wears the ozone layer like a thick blanket. The invisible gas blocks the majority of the sun’s harmful ultraviolet radiation. Without that shield, life as we know it would not be possible.

Hit the link for a historical comparison. (Tipped by JMG reader BK)