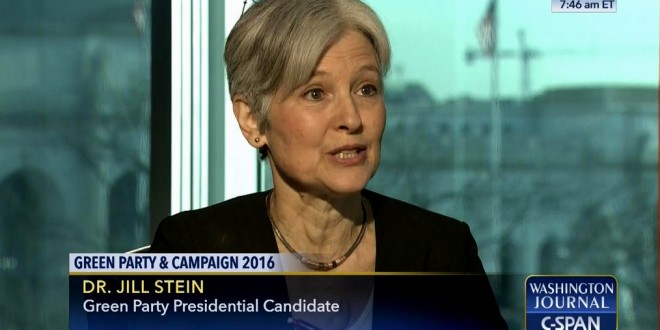 Bernie Sanders has been invited to continue his underdog bid for the White House by the Green party’s probable presidential candidate, who has offered to step aside to let him run.

Jill Stein, who is expected to be endorsed at the party’s August convention in Houston, told Guardian US that “overwhelming” numbers of Sanders supporters are flocking to the Greens rather than Hillary Clinton.

Stein insisted that her presidential bid has a viable “near term goal” of reaching 15% in national polling, which would enable her to stand alongside presumptive nominees Clinton and Donald Trump in televised election debates.

But in a potentially destabilising move for the Democratic party, and an exciting one for Sanders’ supporters, the Green party candidate said she was willing to stand aside for Sanders.

“I’ve invited Bernie to sit down explore collaboration – everything is on the table,” she said. “If he saw that you can’t have a revolutionary campaign in a counter-revolutionary party, he’d be welcomed to the Green party. He could lead the ticket and build a political movement,” she said.

Previous Notorious RBG: Whoever The Next President Is, SHE Will Have A Few SCOTUS Appointments To Make
Next Crackpot Alex Jones: George Soros Engineered The Dallas Attack As Part Of Marxist Overthrow Plot [VIDEO]