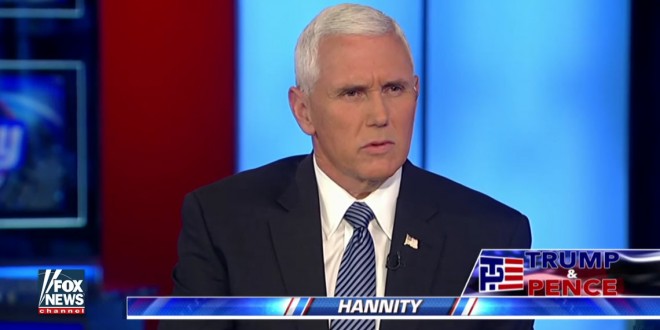 Donald Trump’s newly-named running mate, Indiana Gov. Mike Pence, has shored up discrepancies over his contrasting stances with Trump on several key policies, including past U.S. trade deals, the Muslim ban and the proposal to build a wall on the U.S.-Mexico border.

“You know, you shut the door, you tell the boss exactly what you think,” Pence said on Fox News when asked by host Sean Hannity how he’d work through disagreements with Trump. “But when the door opens, the job of the vice president is to stand right next to the president and implement the policy that he’s decided. And I’m prepared to do that.”

After Trump proposed in December his ban on Muslims entering the United States, Pence called the idea “offensive and unconstitutional.” But on Friday, Pence, lacking nuance, asserted: “I am very supportive of Donald Trump’s call to temporarily suspend immigration from countries where terrorists influence and impact represents a threat to the United States.”

Pence also said he “absolutely” supported building a wall on the southern border and that “absolutely” Mexico would pay for it.

He was also asked to defend his vote for the war in Iraq, a conflict that Trump has repeatedly said he opposed from the beginning and has cited to question presumptive Democratic nominee Hillary Clinton’s foreign policy judgment.

“Reasonable people can disagree about whether we should have gone into Iraq,” he said. Pressed if it was the right decision, Pence declined to answer: “I think that’s for historians to debate.”

Hannity also asked Pence about his prior support of the Trans-Pacific Partnership, a massive 12-nation Asian trade agreement that Trump has regularly railed against.

“I think when we elect one of the best negotiators in the world as president of the United States, I’m open to renegotiating these trade agreements,” Pence said.