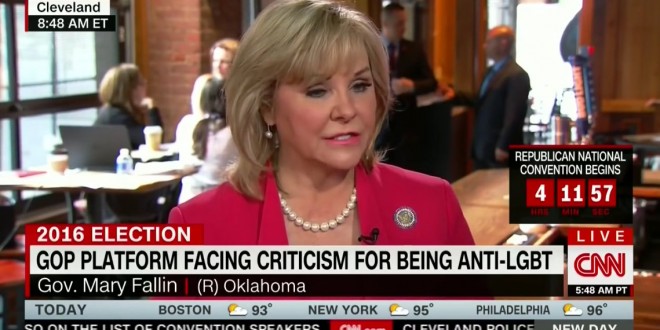 Mary Fallin: The GOP Platform Isn’t Anti-Gay Because There Was A Gay Person On The Committee [VIDEO]

I tweeted in disbelief when she said this early this morning. The HRC recaps the clip below:

Oklahoma Gov. Mary Fallin told CNN this morning that the GOP platform isn’t anti-LGBTQ… because there were “gay people on the committee” that drafted it. That would be one — Rachel Hoff, who emotionally, and unsuccessfully, begged her fellow party members to soften their anti-marriage equality stance. Here’s the reality: the party platform that delegates just embraced is jam-packed with historically discriminatory anti-LGBTQ provisions, from opposing marriage equality to attacks on transgender people.